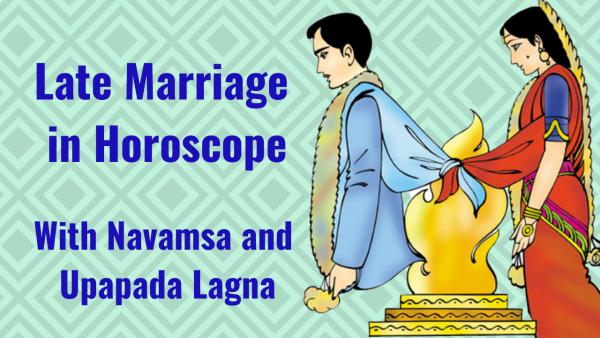 Late marriage in Astrology is a burning topic and we receive numerous queries about delay in marriage. The Marriage custom gives Completeness and absoluteness to males and females. The common difficulties in marriage are not getting Right Match, Breaking of Engagement just before Marriage etc.

In Every Matter, including marriage, Our Own effort is required along with that you Need the help of your Luck and Fortune. That is why we see People who are well educated, Good Looking, Successful but still they are unmarried or They Marry in a very Late Age.

So we have to check the Horoscope Properly and should give Remedies for overcoming delay in Marriage. There are certain Combination in Horoscope which can even Deny your Marriage.

So before Going into Details of Late Marriage or No Marriage or Delay in Marriage Astrology, We have to Know Important Zodiac Signs, Planets etc.

Before we discuss the Astrological combination for delay in marriage, we need to know about marriage houses in Astrology.

8th house is the house of delays and obstacles. It is also an important house for physical relationship and sexual life.

Malefic Planets are Mainly Responsible for Delay in Marriage in Astrology. Rahu, Saturn, Ketu and 8th Lord creates Late Marriage Yoga in Horoscope. Delay in Marriage is indicated in your Horoscope When Rahu, Ketu, Saturn etc influence the Marriage related Houses or Its Lords in your Kundli.

In Vedic Astrology Saturn is the main planet for delay. So, while analyzing the time of marriage if Saturn influence 7th house or 7th Lord in any way, it indicates delay in your marriage. Even in a General way we have found that people with Leo Ascendant or Cancer Ascendant gets Married Little bit late than other People. Even if Leo or Cancer becomes the Navamsa Ascendant, in that case also Delay in Marriage can happen.

Rahu and Ketu are another to important planets which courses delay or problem in getting marriage. When Rahu or Ketu is placed in the 7th house from Lagna, it creates Rahu Ketu Dosha in Marriage. In Some chart we find Rahu or Ketu in the 7th house of Navamsa or D9 chart also. This increases this Stregth of Rahu-Ketu Dosha which will further increase the delay in Marriage or problem after Marriage.

Venus is the significator of marriage. In male chart it’s also indicates life partner or wife. Any affliction or weakness in Venus will cause a delay in your marriage.

Read: Importance of Saturn in marriage

8th Lord of your Horoscope should also be checked if you are not getting Married. The Role of 8th house will be prominent in the delay of your Marriage. If your marriage is not happening, you will find that 8th Lord has made some combination with 7th house or 7th Lord in D1 chart (Rasi Chart or Main birth chart) or D9 chart (Navamsa Chart).

In our country a large number of young people is curious about when they Will get married or if they would get married at all or not. In our society these questions have their own signification and importance and therefore, cannot be ignored in an astrological study on the subject.

Today, especially among the middle class families, Economic stability and settlement come first. So the Age of Marriage has changed from what was considered previously. So we should judge and declare Late or Early Marriage in that context only.

The right age for marriage differs from country to country, community to community. In earlier age 18-20 was considered right age for girls to get married. But now it is completely changed. Astrologically when we talk about early marriage, we indicate marriage within 25-26 for girls and 27-28 for boys.

Marriage between the age of 26-30 for girls and 28-32 for boys is considered right age for marriage.

Marriage after the age of 30 for girls and after 32 for boys is termed as late marriage in today’s scenario. Astrologically Planets also has a Marriage Age which will help you to know When will you get Married.

So if you think why you are not getting married, your Horoscope must have combination that indicated delayed marriage. You can take our Marriage Report to know about this.

Three questions in this connection may be delineated from the astrological point of view.

(i) Whether the horoscope indicates marriage or not?

(ii) If yes, then whether there is delay to finalize the marriage?

(iii) If yes, then to determine how much delay is there and if not, then how much early is the marriage?

A horoscope gives indication about when a native will get married. If the marriage is getting delayed in spite of sincere efforts, You should seek the advice of a good astrologer and the effort should be made to find out what Astrological factors are obstructing the marriage. Suitable remedial measures should be Performed rigorously and religiously.

Combination for Late Marriage in Astrology

While considering various astrological combinations to determine the Marriage age, the 7th house, lord of the 7th house, its significator and their relationship with Jupiter and Saturn should be taken into account.

I have Made a Video on Late Marriage in Astrology. You Can Watch it also to understand how to Use the combinations in your chart.

Further, the planets responsible for marriage, if placed in fixed signs, cause delay in marriage. Similar effects have been observed if a retrograde planet is connected with the 2nd or 7th house either by ownership, aspect or conjunction. Above all, Saturn”s role is most Important in causing late marriage.

Following principles should be checked in the Chart if you are not getting Married.

All of these principles are important in consideration of delay in Marriage astrology. But All the rules cannot be applicable in a single horoscope. A few of these combinations present in a horoscope will delay marriage. If affliction is greater, more delay in marriage will take place. lf many of these combinations are found in the horoscope of one native there will be absolute denial of marriage in Astrology or no Marriage in astrology.

Rahu in 8th house and its effects on marriage

Combination for Late Marriage from Navamsa chart or D-9 chart

Navamsa chart or D-9 chart is the main divisional chart for marriage. Some time we find that there is no late marriage Yoga present in main birth chart but still the native is not getting married. In such situation we have to check the navamsa chart.

Navamsa Lagna is our desire or willingness to get married. When navamsa Lagna Lord occupies 12th house, it can give a lack of interest in marriage this can create delay in getting married.

Conjunct of Venus with Saturn in Navamsa also creates a delay in marriage.

This condition of 7th house, 7th Lord of Navamsa chart is very important to judge.

So, you need to check the D-9 chart along with D-1 chart to understand the possible time frame of your marriage.

In Jaimini Astrology Upapada Lagna is most important for marriage and marriage partner related predication.

If Upapada Lagna and Arudhapad of 8th house is conjunct, it can give you late marriage.

Denial or No Marriage in Astrology

In case of Denial, the 7th Lord or 7th House and Venus will not have any influence of Beneficial Planets. Horoscope Will have very heavy Affliction. Moreover Proper Dasha or Favorable Dasha for Marriage Should not run in correct age.  Without Proper Dasha, Marriage can not happen.

So Very Heavy Affliction regarding Marriage along with absence of Favorable Dasha in proper age will give No Marriage in astrology.

Cancellation of delay or No Marriage in Astrology

The Delay or Denial indicated in the chart will be neutralized or Canceled if Jupiter and Saturn both occupy 7th house and both of them own 5th or 7th house.

If Venus is exalted and conjunct with Saturn or Jupiter, it will give Marriage though there will be delay.

Remedies for overcoming Delay in Marriage

In Vedic Astrology you can perform Some remedies to Reduce the Delay of Your Marriage. But We should always keep it in mind that Remedy will only help you to reduce the Delay to Some extent.

Now I will share some easy remedies for late marriage. You can use these remedies if your marriage is getting delayed.

2. The Most Widely used remedy for Late marriage in astrology is that You should strengthen or propitiate your 7th Lord.

3. Another remedy for delayed marriage is donating white or silk clothes to women in Friday specially Shukla Paksha.

4. If any planet like Saturn or Ketu is in your 7th house, propitiating them with Manta is also a good remedy for late marriage in astrology. Worshipping the God of that Planet Specially in Clay Idol, is Very Useful.

The God for Each Planet is

5. You Can also Strengthen the 7th Lord by Wearing the Gemstone of that Planet. But the quality of the Gemstone Should be Good. You can also Purchase Good quality Gemstone from Our Store.

If you Want to Know About Your Marriage and Relationship, You Can also Take our Marriage Report.

I have shared some astrological principles for late marriage in astrology. But you should apply these principles with proper judgement. In astrology nothing works in isolation. So you have to use these combinations cautiously.

I hope the above information will be helpful for you. In case of any query feel free to comment below.

Matchmaking with date of birth (DOB) for Marriage Online

Navamsa (D9) Chart- its importance and use in Analysing Birth Chart

Jupiter (Guru) in 7th house in Male and female horoscope