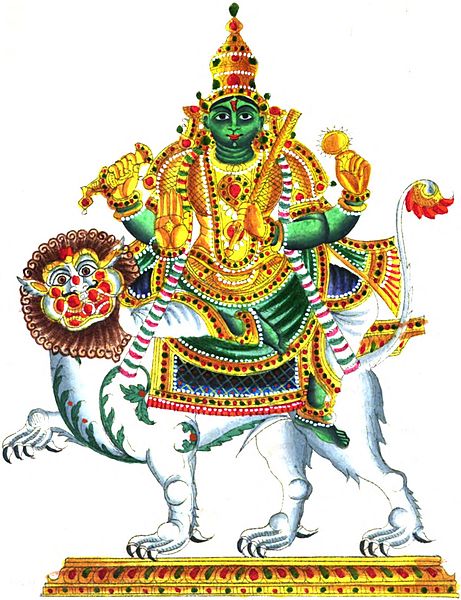 Is Budha or Mercury really a neuter planet ? Is it really bad for sexual life ?  Mercury is the prince of the planetary Kingdom. The sun is the King, Moon is the queen likewise. It rules over all sort of communication, trade and commerce. Budha signifies learning ability and quick grasping power. It rules over intellect and logic. A person who has a strong mercury is generally seemed to be very logical.

Read Nature of All the Planets

But our point of discussion is something different.

Lets Begin with the beginning. But read till the end, I am sure you will get something new.

Jupiter or Brihaspati is the Devguru. He performs all the dharmic rituals for devas which are known as Yagnas. But Alone Jupiter can not do all this rituals. He needs his Wife Tara devi beside him for helping. without shakti he is helpless. The stree shakti i.e. Tara devi is the manifestation or expression of Jupiters Energy.

Tara devi is very young and beutiful. She want love and care of her husband a lot. But Jupiter being a guru or dharmic person is unable to understand the inner desire of Tara devi. He was not giving her the required attention. Tara devi felt ignored and thought that she has become a mere helper in performing the rituals.

During this time she saw Moon. Moon has a very charming look. As soon as Tara devi saw Moon, she became attracted and infatuated. Seeing the ravishing beauty of Tara devi, Moon also lusted madly after her. One day when Brihaspati was away from home, Moon entered thru the window. Moon was expert in Love making and Tara devi got the Love for which she was waiting long. she eloped with moon and started staying in the house of Moon.

When Brihaspati got this News, he went to Moon and told that ” you have abducted my wife, Return him immediately”. But Moon refused to return him and said that he has not abducted his wife and Tara devi has come with his own wish. Jupiter returned with empty hand.

After Few days again he went to Moon and furiously asked Moon to return his wife otherwise he will curse him. Moon, without any fear told that Jupiter is so much full of lust that his curse will not affect him. He also told that Tara devi do not want to go back to Brihaspati and want to stay with Moon.

Angry and insulted brihaspati went to Indra, the king of God, and told him that he will not perform any rituals untill Moon returns his wife. Now if Jupiter stops his dharmic rituals, Gods will become weak and asura or demons will capture the swarg Lok or Heaven. ALl the Gods, including Indra was confused what to do. Should they force Tara to return to a person who has never given her any love and affection and used her as a instrument of ritual ? Should they force Tara devi to leave her Lover and who made her feel alive ? But ultimately all the Gods had to agreed to the condition of Jupiter.

With the persuasions of Indra, Finally Moon agreed to Return Tara. But When Tara devi returned, she was pregnant. Both Brihaspati and Moon claimed the child. But Tara devi was silent and she refused to give any clue about the father of the child. But every one became astonished when the unborn child cried and asked ” Tell me mother, who is my father ? I deserve to know ”  Listening this, Tara devi Lowered her eyes and said that you are son of chandra. Bramha was present at the place and he said that this boy will be the lord of Buddhi or intellect and will be known as Budha.But Jupiter was furious, he cursed that may this child be neuter gender nor male nor female. SO Budha is known as neuter gender and it is said that it is not good for marriage and progeny.

So far nothing new. We all know this story. But I am not sure how many knows the next part.

Jupiter was of satwik nature. Soon his rage pacified and he gave Budha all the wisdoms that he has. It is often said that Jupiter is the ideal Guru and Mercury is the ideal Student. with Passing time Budha grew up. He is now reached to marriagable age.

One day he was roaming around and in a forest he saw a very beautiful lady. The lady was taking bath in a Lake. He felt very much attracted. The Lady was ILA.

There was a king known as Sudyumna, who was very dharmic and rightous in nature. Once he was out for hunting. after several day, he reached a strange forest. After ntering into the forest he felt a strange sensation in his body. After a while he noticed that he along with all his servents has transformed into a lady. From Male to female.  Actually this forest was not an ordinary forest, once shiva and parvati was making love in the forest and suddenly some munis entered into the forest and saw them. At that time shiva told that any man who will enter in this forest will be turned into women. But sudyumna was unaware of this fact. So when they decided to stay in that particular forest itself, because if they go outside, every one will be laughing at them. No one will recognise them. So they setup an ashram for them and started living there. Sudyumna took a name for himself, ILA.

When ILA came out of the Lake she saw a beautiful God in front of her. After being turned into women, it is the first time she saw any man. Budha married ILA. In due time ILA gave birth to a son who was known as Pururavas.

So Now the question, If Mercury is really neuter how can he become father of a child ? If he was nor a male nor a female how can he marry and even if he married how a son was born out that marriage ?

This is really a mystery which is difficult to understand. I will invite all the other member to throw light in this too.

Why Arjun Killed suryaputra karn in a unfairly war

Navratri is Knocking the door-Why this is so important