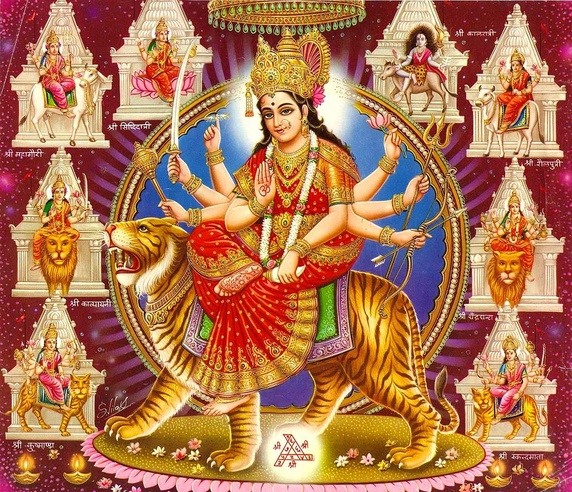 What is the Meaning of Navratri

Navratri means Nine Nights. It is a famous festival in India which celebrated for Nine nights and ten days. In these days we worship Devi durga who is a form of shakti. It represents the win of good over evil. I would like to quote Bhagvati Gita translated by Ramesh Menon ” Spring and Autumn are the months of Sickness and death. They are even called Yamas Teeth.They are the threshold of Utarayana and dakshinayana, when the sun turns north and south, and these are the seasons when the world is unstable. It is at these times that men have a special need for grace.” so in the month of ashvin or autumn Devis Navratri puja is undertaken. It starts on the day of the new moon i.e.amvaysya and ends as Vijaya dashami.

If we go with mythology, when Lord Rama started his war with Ravana, it was not easy to defeat Ravana. At that time, Bramha Dev suggested Lord Rama to do Navratri Puja and worship Devi durga. Ramchandra worshiped Devi Durga for nine days with full devotion. This is the starting of Navratri.

Navratri refers to Nine nights. Night means darkness. Here darkness means ignorance, lack of morality, sorrows and sufferings and all sort of negative traits we can imagine. when these darkness takes a firm grip on us, we need the divine grace to get rid of these negativity. Devi Durga is a unified form of Lakshmi, Saraswati and Parvati. These three godess together represents shakti which is the energy or power to overcome all the troubles and sufferings. Even Lord Rama worshiped Devi to become victorious over Ravana. We believe that in these nine days Devi stays with us and shower her blessings on us to remove all the evil things from our life.

During the period of nine days nine forms of durga which is also known as Nava durga is worshiped. The Puja starts from Pratipada tithi i.e. the first days of the waxing moon.  Below is the list of goddess worshiped in each day as per the following order

The Story of Devi Durga and fight with Mahisasura

We all Know How Devi Durga Killed a Asura who was Known as Mahisasura. The story in brief is that Once there was a Asura King, Rambha, Who got a boon that his son will be great warrior and no one will be able to defeat him. He married a she buffalo and a child who was half buffalo and half Asura was born out of this union.This child was known as Mahisasura. He worshiped Lord Bramha and got a boon that his death is possible only at the hand of a women. After getting this Boon, he started a war with devas and defeated their King Indra and took over Swarg. Then Indra asked the help of trinity, Bramha, Vishnu and Mahesh. Trinity combined their energy and created a women who was very beautiful yet very strong. This goddess is Devi Durga. Ultimately Devi Durga fought with mahisasura and Killed him and Indra got back his Kingdom.

Actually Asura and Devata both stays within us. All the good thoughts, positive thinking, purity is the form of God. on the otherside, all sort of negative thinking, greed, ahankar is the form of Aura. There is continuous fight within us among these good qualities and Bad qualities. This is similar to war between Devata and Asura. Devi Durga is the symbol of good and she defeats the mahisasur who is the symbol of evil. So we worship Devi Durga to improve the positive or good qualities within which will enable us to defeat all sort of negativity within us. Generally the negative energy around us is very strong and it can attract us very easily. Its not an easy task to overcome these energy, like our greed or anger. So we seek the blessing of Devi Durga who is the ultimate form of Shakti. We do all Pujas and fasting in Navratri to grow this shakti within ourself to defeat the Asura named Ahankar, Lobh, Krodh, Ignorance etc.

Why Arjun Killed suryaputra karn in a unfairly war

Is Mercury Really a neuter planet