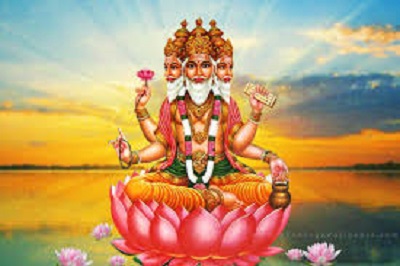 Generally people give more respect and worship the gods who are famous for their power. Shiva is famous for his third eye. Everything turns into ashes once Shiva open his third eye. Not to forget He has a fearsome trident. Vishnu is famous for his sudarshan chakra. Kali, Durga all are the form of Shakti. They are the symbol of winning of good over evil. People tries to fetch strength worshiping them. But no such story is related with Brahma. Puranas have not depicted him as  a aggressive god but a timid, generous one.

There are few stories about Brahma which tells us why Brahma is not worshiped.

During the initial days of cosmos, when Brahma was busy in creating the world, he created goddess Shatarupa for helping him. Shatarupa is also known as Saraswati. But as soon as he created her, he became infatuated seeing her ethereal beauty. But Saraswati was not ready for it and she tried to escape. she moved in various direction to avoid his gaze but bramha followed her. In this process Bramha created four head in four direction to keep an eye on her. Finally Saraswati took shelter in a cave but Bramha followed her and associated with her in that cave. As Bramha had created Saraswati, she was actually her daughter but still he developed carnal desire for her. So for this illicit act Saraswati cursed her that no one in the world will worship Bramha.

You can also like to Read Karma, Rebirth and Astrology

Another Story is curse of Shiva. This story is given in Shiv Puran.

Once Brahma and Vishnu started fighting on who is greater among them. The argument became so fierce that they reached to Shiva and asked to for his decision. Lord Shiva gave them a challenge. Whoever will be able to see the top of Lord Shiva’s head first will be the winner. Both Brahma and Vishnu accepted it. Shiva took a huge form that stretches across various Lokas or universe. Vishnu was very intelligent, so he soon realized that this is a impossible task. So he started praying to Lord Shiva profoundly. But Brahma went upwards along the length to reach the top. While he was going, he saw flower ketaki. So he decided to use a trickery. He convinced Ketaki to testify in front of Shiva that, he, Brahma, had reached the top of Shiva’s head first. Ketaki Flower agreed and when brought infront of Shiva, the flowered told shiva that Brahma had reached the top first. Shiva was very furious with lie. He cursed Brahma that No body in earth will worship him and also cursed Ketaki flower that, this flower will not be used in any ritual. Lord Shiva became very pleased with the prayer of Vishnu and he appeared before him. Vishnu fell in his feet and when shiva bowed to pick him up, Vishnu claimed that he had seen the top of Lord Shiva’s head. Vishnu was victorious.

Whatever be the Actual reason, the fact remains that Brahma is not worshiped generally. There is a place in Rajasthan, Known as Pushkar where there is a Temple of Brahma. It is assumed that it has been made at least 2000 years ago. There is very few temple of Brahma of this size.

Satvik-Rajasik-Tamasik Personality and Meaning in Astrology

What is important in Blue Sapphire or Neelam

Book Your Consultation !
Astrologylover is your Favourite Astrology Blog. We provide you the Most Accurate Information About Vedic Wisdom. You can reach our office in Palashdiha, Asansol-713341
Contact us: astrologylovers.com@gmail.com
© 2022 Copyright Astrologylover
MORE STORIES
Dating Tips

Best dating sites for over 50